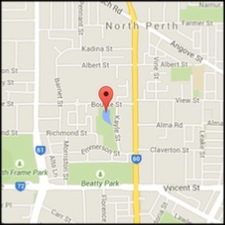 Smith's Lake is a compensating basin on the Claisebrook Main Drain, located on the corner of Bourke and Kayle Streets in North Perth not far from Beatty Park.  However to local residents it is much more than a compensating basin - it is a valued local park, a water body and a reminder of the large lake which once covered much of the surrounding area.

When the catchment group formed in 1997, members were concerned that there was little shelter for breeding waterbirds at the lake which was primarily surrounded by mown lawn. Together with the City of Vincent and the Water Corporation, the catchment group obtained Lotteries funding to prepare a plan to restore the natural sloping edges to the lake and create a wetland area to be planted with native sedges and wetland plants.

Following consultation with the local community, the restoration plan was approved by the Vincent Council.  The Council and the catchment group then successfully applied for funding through the Swan Alcoa Landcare program.  Earthworks started in 1999 and a hugely popular community planting saw the start of the return of native wetland plants to the lake.

In 2006 the northern half of the lake is now surrounded by dense vegetation which provides shelter for nesting waterbirds.  The number of bird species using the lake and surrounds has increased since the restoration work with Banded Rail and Reed Warblers being two new species which are now present at the lake.

Smith's Lake is a tiny reminder of the large seasonal wetland which once covered much of this area. Danjanberup was a valuable food source for the Noongar people, particularly in late spring and summer.

Early settlers named it Three Island Lake after three small islands of higher land on which an early settler, John Smith, built his farm buildings.  The Smith family retained land in this area for several generations resulting in the unofficial name "Smith's Lake" which appears on an 1897 map.  Gradually the ‘lake’ area diminished as the area was drained and developed for farming.  The 1897 Sewerage Map shows Smith’s Lake as being made up of two segments with a number of farm buildings in the area.

In the 1920s the lake was drained to allow the area to be "developed".  The former lake bed was used for market gardens for many years though by the 1950s many of the market gardens has been overtaken by weeds and the area was considered an unsightly swamp.  The Perth City Council acquired the land in the area, using the former lake as an uncontrolled tip for some time before levelling and creating the park and surrounding housing blocks which remain today.  The small portion of the swamp land that was developed to form a compensating basin for the Claisebrook Main Drain is all that remains of the former wetland.

Click here for a printable version of the maps shown on the right.

The catchment group continues to undertake weeding and further planting at Smith's Lake together with the City of Vincent.  The most recent planting on National Tree Day 2006 saw the southern edges of the lake planted with wetland sedges.  These are now growing well.

Smiths Lake is near the corner of Bourke and Kayle Streets