We have been working to improve the aesthetics and restoring the natural habitat of the Hamilton Interchange Lakes in Northbridge - yes, Northbridge!

The lakes are located in the freeway interchange at the western end of the Graham Farmer tunnel.  The lakes are a constructed wetland which take runoff from the freeway and are part of the connected system which takes water from Lake Monger to the Swan River in Mounts Bay.  While the current lakes have been constructed they are located on the site of a former wetland which was filled in earlier times to provide land for light industry.

The lakes are located on the former site of Lake Sutherland.  The lake(s) are sometimes referred to as Bunnings Lake because Bunnings used to have an extensive workshop on the site.

So far the project has involved some serious mulching and three planting sessions extending from 2011 to 2014.  The project has been supported by funding from the Swan River Trust Alcoa Landcare Program (SALP), the City of Vincent and Main Roads.

The aim of the project is to improve the habitat at the wetland and provide an important fauna refuge in a busy urban environment.  The project has been broken into 3 stages.

This involved weed management and initial planting at the western end of the main lake and was undertaken in 2011.  We also coordinated a Cleanup Australia Day activity to help remove a lot of rubbish which had found its way from the freeway and through the drainage system.  This stage was funded by the City of Vincent.

This involved some serious mulching and planting in the north east corner of the main lake and was undertaken in 2012. Even though the site had once been a natural wetland it has subsequently been filled in and then used as a depot site during the construction of the Mitchell Freeway.  The soil was therefore primarily yellow sand that had been trucked in as well as areas of limestone hardstand.

Because of its remoteness from any form of reticulation and its relatively exposed position we decided to invest quite some effort in putting in a thick layer of mulch to help retain any moisture.

Stage 2 was funded by a SALP grant and by assistance from Main Roads in getting a small pump.

This involved filling in where plants had died and extending the planting to the south east corner and was done in 2013. 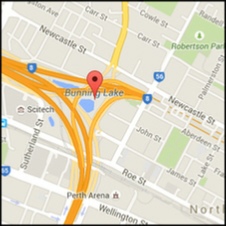 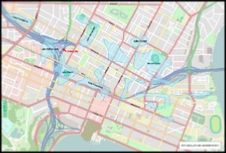