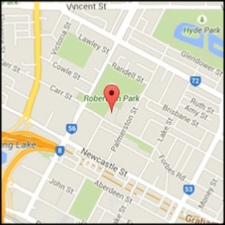 Robertson Park and nearby Dorrien Gardens soccer ground were once a large lake, part of a chain of lakes north of Perth CBD between Lake Monger and the Swan River. Boojoormelup (later known as Lake Henderson) was a seasonal wetland which filled up with winter rains, and dried out in summer.

The inland freshwater lands and swamps north of Perth City were important to Aboriginal people who camped on the swamp margins and hunted and gathered the wetlands wildlife. The lakes provided frogs, root tubers, freshwater turtles, fish, gilgies and waterfowl and were a place for gatherings during seasons of plenty.

The Perth newspaper, The Inquirer reported in January 1850:

"CORROBOREE - On Friday evening a grand corroboree was held at Anderson's Lake (sic), at the back of the town, by upwards of 300 natives, belonging to all tribes inhabiting the country for a circuit of 200 miles from Perth"

Twenty years later, convict labourers extended the stormwater drainage system to Robertson Park and the lake disappeared completely. During the 1800’s the land was used as part of the Chinese market gardens however as the urban sprawl continued a range of industries were built surrounding the site and the site became the bottle yard. This site was used for that purpose all the way until the mid 1900’s when it was filled in and turned into grassed parkland with few native trees scattered on the edges.

In 1999 the Claise Brook Catchment Group suggested that a small wetland could be recreated within the park as a feature of interest and to restore an area of natural habitat. Stormwater runoff from surrounding streets would fill the wetland in winter which would dry out naturally in summer. Planted with local Australian plants, the wetland could attract birds, frogs and perhaps even tortoises back into the area. The catchment group and the City of Vincent prepared plans and obtained funding through the Swan Alcoa Landcare Program to construct a wetland.

Construction of the wetland

The earthworks for the construction of the wetland began in April 2004. During the excavations the archaeologists unearthed a number of items including bottles from the old bottle yard, pieces of crockery and rusted metal. By June 2004 the excavation and the earthworks were complete. The water holding body was lined with clay to minimise seepage into the ground water.

In July 2004 with a help of approximately 100 volunteers and local residents 5,200 sedges and dryland plants were planted. The flooded gums, Eucalyptus rudis, planted around the wetland were grown from seed gathered from an old flooded gum in Robertson Park, behind Lee Hops cottage, which is the only surviving original vegetation in the park.

The lake edge and creek channel are planted with sedges and paperbarks. The lake fills after rain and dries out in summer when herbaceous plants such as Cotula coronopifolia grow across the lake bed. The sedges stabilise the banks of the lake and strip some of the nutrients out of the stormwater. The bacteria associated with the roots of these plants also help to reduce nutrient load on the water body hence improving the water quality.

The aims of the project were to:

The group is been heavily involved in maintenance of the wetland Robertson park and meets there on the first Saturday of every second month. Members weed, plants and collect seed which is propagated to grow seedlings which are planted back around the wetland the following season.

Anyone with an interest is welcome to join us at a working bee at Robertson Park.

Click here to find out about the next working bee or visit our activities page.

Help the wetland at a Working bee - first Saturday of every second month. All welcome

Robertson Park Wetland is located near the corner of Stuart and Palmerston Streets, Perth 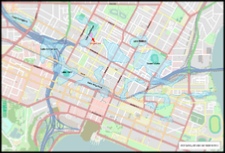